Clearview Homes has preserved some Marlow history at its latest development Signal Walk, on Station Approach. Sitting on the site of Marlow’s original railway station, the company has ensured that it has sympathetically designed its new development to allow the only remaining piece of the old station platform to be incorporated into the scheme.

To mark this Marlow Society, a registered charity associated with the preservation and development of Marlow and its surrounding villages and countryside, have produced a commemorative display board for the development which details the history of the old railway station, along with photographs dating back to early 1900s. 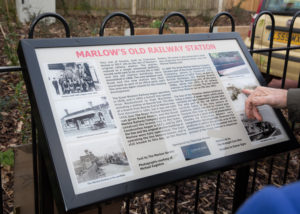 Shelley West, Sales and Marketing Director for Clearview Homes comments, “We are delighted to have been able to work closely with Marlow Society to produce a display board which will keep the history of the old Marlow railway station alive for years to come. As part of our development, we ensured that great care and attention was taken to all building works around the original platform.

The Great Western Railway began operation in 1838, and in 1854 a branch line opened from Maidenhead to High Wycombe, including a station at Bourne End. The idea of a branch from Bourne End to Marlow was first discussed in 1864, but it was not until 1868 that The Great Marlow Railway Act was given Royal Assent, and the Great Marlow Railway Company given powers to construct the branch line to the town.

Construction began in 1871, and by 1873 the line and the original station buildings at Marlow were fully operational. The train operating the line became known, and is still known to this day, as the Marlow Donkey. The name is also preserved in what was originally the station hotel and now the Marlow Donkey pub.

In 1897 The Great Marlow Railway Company became part of the Great Western Railway Company, where it remained until nationalisation in 1947. Then, as part of British Railways, the Marlow Branch survived ‘Beeching cuts’ of the early 1960s, which saw 55% of all railway stations in Britain closed. The last steam train from Marlow ran on 7th July 1962. 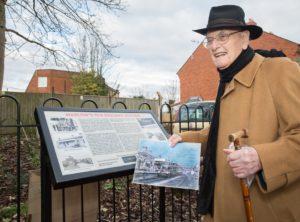 The station was reduced to a simple unmanned platform and was later moved north east to its current site in 1967 and the old station buildings were demolished in 1968. The area between Lock Road and the new station was then developed as part of an office park, until the area was again cleared for Clearview Homes’ development, Signal Walk.

Keith Ray of Marlow Society comments, “We would like to thank Clearview Homes for all their help preserving this important part of Marlow history. We have worked closely with them throughout the development of Signal Walk and it is nice to see a development that is able to deliver a design solution which is contemporary, whilst still being sympathetic to the local environment and its history.”

Signal Walk is located in the heart of the sought after riverside town of Marlow, Buckinghamshire. The development features nine, three bedroom homes with accommodation spread over three floors. Each home has been finished to an exceptionally high standard and feature designer kitchens, fitted wardrobes and glazed roof to the dining area, allowing natural light to flood into the kitchen and dining area.

As well as spacious living space spread over three floors, each home has the added benefit of private parking, which is something highly sought after in Marlow. The development is also moments from the train station offering regular services into London, Reading and the West, with the added bonus of Crossrail coming to nearby Maidenhead in 2018 which will have a positive effect on commuting times from Marlow.

Be kept informed of our latest developments

Call our expert team and we'll help guide you through the process.

Please complete the following to register your
interest in the latest Clearview Homes developments.